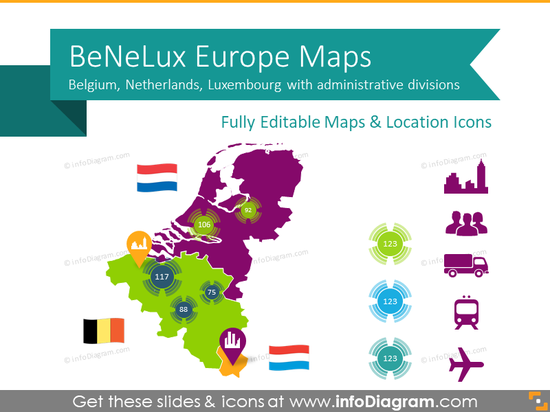 Editable maps of Belgium, Netherlands (Holland) and Luxembourg - so-called Benelux Union of 3 countries in western Europe. They compose pretty much the administrative center or European Union (NATO headquarters and European Commission are in Brussels, the Belgian capital).

All Benelux countries have maps with provinces administrative division, capital and country facts such as population or GDP. So you can present a map with locations of activities, transport or meetings. This PowerPoint template contains text placeholders and call-out boxes with basic economical data of those Benelux European countries. You are free to modify it, add your own descriptions.

Those three countries are grouped within Benelux Union of countries, inside European Union as they share a similar location and economic activities. They are located in northwestern part of Europan region, in the hearth of EU political activities (Brussels is a place of NATO HQ as well as European Commission ).

You can use those maps to present meeting plans, the location of factories, supply chains, company headquarters or business subsidiaries. You can present on the map the travel plans and logistics routes by adding various POI icons and adding arrows between locations and regions, adding transportation means.

For each country, we added an overview of main geographical and political data, including capital location, GDP, population and area data. You can use these slides to analyze the local European market, for example.

We added a bunch of map placeholder, that allow you to draw influence regions e.g. around major cities, add data values in those influence radius, create legend with various color categories etc.

Icons for showing localization and logistics on maps: Examples of PowerPoint maps visualization: 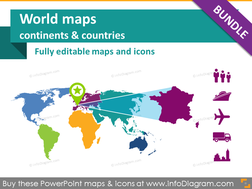 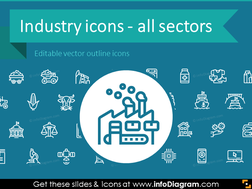 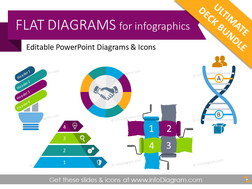 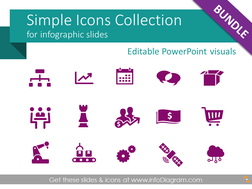 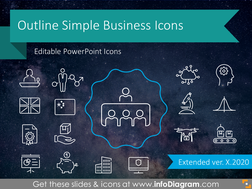 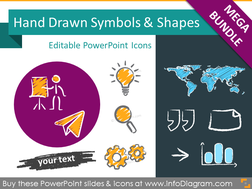